UEFA revealed Team of the Year 2016 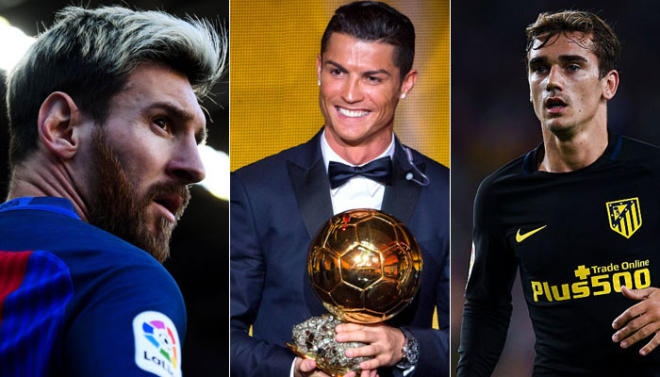 Cristiano Ronaldo, Lionel Messi and Antoine Griezmann have all been named in the UEFA.com Team of the Year for 2016.

Real Madrid's Ronaldo, Barcelona's Messi and Atletico Madrid's Griezmann -- who finished first, second and third respectively for the 2016 Ballon d'Or -- were voted in alongside eight others by UEFA.com users, with almost 7.2 million votes being cast by 650,000 fans.

The side is dominated by La Liga players, with eight making the cut, while 2016 Champions League winners Madrid lead the way with four of their own selected.

Selected in midfield behind the attacking trio were Madrid pair Luka Modric and Toni Kroos, as well as Andres Iniesta of Barcelona.

There were Madrid and Barcelona players selected in defence in Sergio Ramos and Gerard Pique, who were named alongside Bayern Munich's Jerome Boateng and Leonardo Bonucci of Juventus.

Bonucci's Juve teammate Gianluigi Buffon, meanwhile, was voted in as the team's goalkeeper.

Ramos received the most votes, picking up over 488,000, while Ronaldo has been named in the side for a record 11th time.