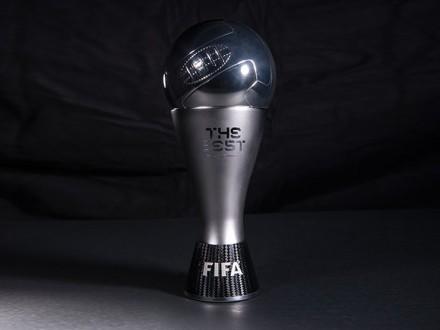 The Best FIFA Football Award will honour the elite footballers and coaches from across planet football, and a suitably symbolic and iconic trophy is needed to represent the highest individual honours in the sport.

Axar.az reports that the trophy itself, which stands at 310mm and weighs a substantial 6.4kg, is adorned by a ball at its pinnacle. This is perhaps its most striking feature, a suitable homage to FIFA’s original tournament.

“The ball on the top of the trophy represents the history of football and the history of FIFA too," FIFA's Deputy Secretary General of Football Zvonimir Boban told FIFA.com. “I believe this is beautiful storytelling, it shows respect for the traditions of football, while maintaining a modern look. This makes it a purely postmodern trophy."

It was a moment to behold when Boban revealed the trophy for the first time to Katicic, who was flown from Zagreb to the factory to see the finished version.

“When I saw the trophy for the first time, I was overwhelmed,” Katicic smiled. “It was purely a dream come true. I’m so happy to have been part of this project and to be connected with these experts in high technology that produced it. It looks wonderful, it’s so fine, so precise, so detailed. It combines simplicity and minimalism that were the ideas behind the trophy and it is really magical.”

One imagines that whoever is named The Best, by the assorted players, coaches, media and fans who have voted, will have a similarly emotional reaction to seeing the trophy, when they finally hold the weighty prize in their hands.