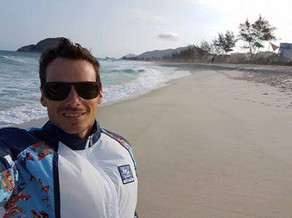 Axar.az reports citing to Report informs Meglič started as coach of Austria national team from this year.
33-year-old sportsman made comments on his decision to press service of Azerbaijan National Rowing Federation: “I was aspiring to achieve success in Olympic Games. I was training hardly and putting great effort. But mistakes happen, especially in canoe slalom. That’s what happened in ‘Rio-2016’. I did everything to pass the distance fast. But I made several mistakes. And I am not as young as used to be. After Olympic Games I participated in World Cup in Slovenian capital Ljubljana on September 7-11, qualified to final stage and took seventh place. After that regatta I got an offer to be coach of Austrian national team. I am already a coach from this year. We train 9 slalom canoeists with my colleagues”.

Notably, Jure Meglič started to represent Azerbaijan in early 2014. Slovenian 3-time European champion was invited to our country aiming at development of canoe slalom sport. The experienced sportsmen had to prepare for regattas abroad due to lack of training conditions for canoe slalom sport in Azerbaijan. Meglič showed necessary result in 2015 World Cup to gain license for 2016 Rio-de-Janeiro Summer Olympic Games. He finished 14th in semifinals of Olympic Games and left the tournament.