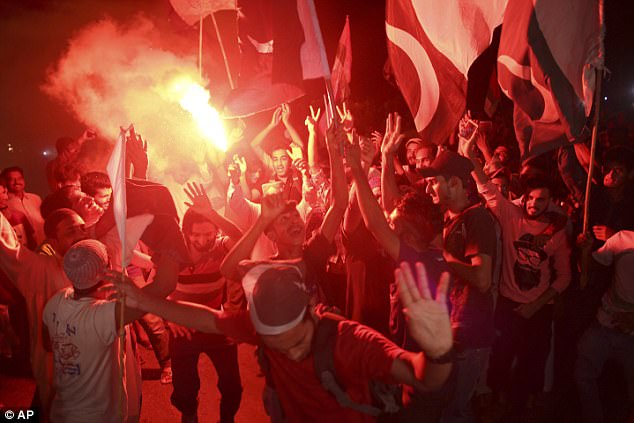 Hundreds of fans stayed up late to welcome home members of new Champions Trophy winners Pakistan in the cities of Lahore and Karachi on Tuesday.

Messages such as 'Champion of champions. Team Pakistan! Welcome back after such a tremendous victory' were emblazoned on banners erected at Allama Iqbal International Airport, along with a picture of the team carrying the trophy.

Television footage showed supporters chanting 'Pakistan Zindabad,' which means long live Pakistan, when four of the players entered the public area at 2.30am.

Punjab chief minister Shahbaz Sharif was due to receive the cricketers, but Geo Television reported he couldn't travel to the airport at the last minute because of security reasons.

Pakistan stunned the cricketing world on Sunday when they crushed rivals and hot favourites India by 180 runs in the final.

Ali took three wickets in the final and finished as the tournament's leading bowler with 13 wickets in five matches.

Fans surrounded Ali's car and showered it with rose petals, while the fast bowler smiled and waved from inside the vehicle.

In the southern port city of Karachi, fans decorated the entire street and house of captain Sarfraz Ahmed, who arrived with fast bowler Ruman Raees at 4.45am. with the trophy that Pakistan had won for the first time.

Both cricketers were presented with traditional Sindhi shawls and caps at the lounge as fans and airport officials didn't miss an opportunity to take selfies with their heroes.

'Thanks God... it's all because of prayers of whole nation,' Ahmed said as he walked out of the lounge surrounded by dozens of his fans and security officials.

Raees said he didn't sleep for two days because of all the excitement following the win.

'I dedicate the win to the whole nation and we enjoyed the victory a lot, congratulations to the whole country,' Raees said.

Provincial governor Mohammad Zubair said he was proud of 'son of Sindh' Ahmed and hoped the victory will ignite more energy into youngsters playing the sport.

'He is the son of Sindh province and we are here to accord him warm welcome,' Zubair said.

'We have not hosted any international team for the last eight or nine years, Pakistani players are barred from playing in the IPL (Indian Premier League), but I'm sure with this victory our players will get more opportunities.'

Back at Ahmed's home, hundreds of fans waited through the night to welcome their hero, with some carrying children on their shoulders to get a glimpse of Pakistan's winning captain.

Fans had also brought a special 70-foot long national flag and carried it in the street as Ahmed drove home in a special convoy provided by the provincial government.

It took Ahmed nearly half an hour to enter his house once his car drove into the street as fans clamoured for photos and a glimpse of their national team captain and police tried to clear the way.

Ahmed waved the trophy from the balcony of his house as he was showered with rose petals, much to the delight of his fans who were chanting 'Pakistan Zindabad'.

'This is your trophy and we won it just because of you,' Ahmed said before waving goodbye to his fans.