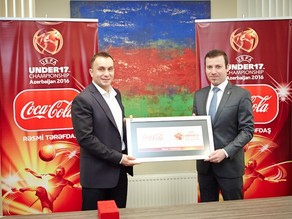 'Coca-Cola' company has been selected as an official partner of the U-17 European Championship, which will be held in Azerbaijan.

In accordance with the agreement, the company, which has acted as a main partner of Olympic Games, the FIFA World Cups and UEFA European Championships for many years, will provide Baku competition with its products.

Notably, the European Championship will be held in 4 stadiums of the capital on May 5-21.