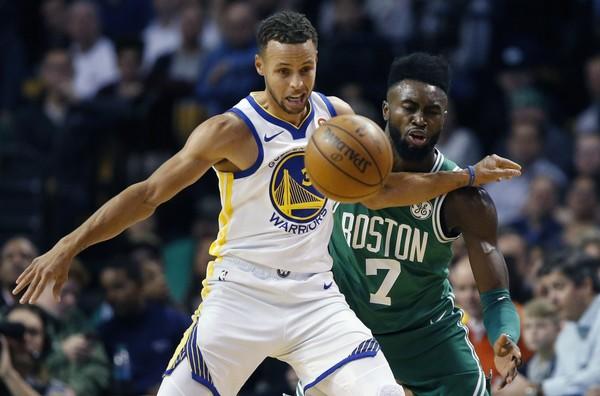 The Celtics gave their fans reason to celebrate Thursday, edging the Warriors 92-88 at home to earn their 14th straight win.

Axar.az reports citing Sporting News that, Golden State led by as many as 17 points, but a fearless second-half run led the Celtics back into contention. Building off an emphatic home atmosphere, the Celtics ground out another win despite struggling to shoot from the field.

Here are three takeaways from the Celtics' big early-season win
1. Warriors are still operating in first gear — The Warriors know they're going to make the playoffs, but they looked Thursday like a team sleep-walking, almost going through the motions. Boston's defense has been tough, and Stephen Curry was ice-cold most of the game, yet Golden State's energy level still seemed down.

Too often, the Warriors settled for tough outside shots or contested shots around the rim. Their normal quick-pass offense was replaced by isolation and blindly chucking up 3-pointers. The Warriors turned in a lazy display offensively, which is something they wouldn't do in the playoffs.

2. Celtics keep finding new ways to win — While the Celtics sometimes fail to pass the eye test, they have now won 14 straight games. Stifling defense and late-game offensive efficiency has been their keys to victory, and Thursday they held the Warriors to just 41 second-half points.

Boston closed out the third quarter on a 19-2 run even though the Warriors had been dominating teams in the third quarter. All five Celtics starters scored in double figures, making key shots and free throws in the second half. Kyrie Irving, while hearing "MVP" chants late in the fourth quarter, scored 16 points with six assists.

Shooting is a concern for the Celtics. They shot just 32.9 percent from the field Thursday and an ugly 21.9 percent from 3-point range. Gordon Hayward's presence has been missed, but the Celtics can't be stopped right now.

3. Jaylen Brown could be Celtics' X-factor — Brown scored 22 points on 3 of 8 shooting from beyond the arc. Picked No. 3 overall in last year's draft, Brown has flashed dynamic athleticism getting to the basket. Though not known as a pure shooter, Brown has worked on his shot, leading to a more fluid stroke and the more complete offensive game overall.

Brown's energy and versatility helped lead the Celtics back into the game during their third-quarter run. If he can become a more consistent offensive threat, by working on his outside shooting, he could emerge as Boston's third offensive star.