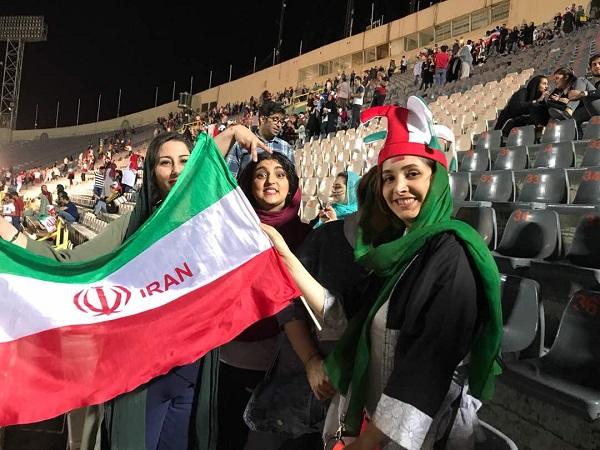 Female soccer fans in Iran were taken through a roller coaster of emotions on Wednesday — and all before their team stepped onto the field to play against Spain.

For 38 years, women have been banned from watching men's sporting events in Iran. But on Tuesday, local news agencies in Iran reported that women would be allowed to watch a live broadcast of Iran's World Cup match against Spain, taking place in Russia the next day, at Tehran’s Azadi Stadium. Then, just hours before the doors were set to open, authorities canceled the event.

"Tonight’s match between Iran and Spain will not be broadcasted at Azadi Stadium today due to infrastructure difficulties," Iran's Tasnim news agency wrote less than three hours before kickoff. "Since there will be no public broadcast, it is respectfully asked from our dear nationals to avoid going to Azadi Stadium."

Many fans turned up at the stadium anyway. On Twitter, photos and videos were posted of Iranians sitting, standing and playing vuvuzelas (the plastic horns made famous at the 2010 World Cup in South Africa) in protest. Decked out with Iranian flags, headscarves and other paraphernalia, both female and male soccer fans stared down a row of police blocking the entrance to the stadium.

Finally, after about an hour, the police gave way. The stadium gates were opened and men, women and children who had bought tickets filed in, whipping out their phones and selfie sticks to capture a piece of history. Moments later, the official account of Iran's national team tweeted a picture of a female fan in the stands of Azadi Stadium holding up an Iranian flag. "Azadi Stadium, now!" the tweet said in Farsi.

Iran’s ban on women watching men’s sporting events has long sparked protests, but it became the subject of heated debate in the lead-up to the World Cup.

Earlier this year, Iran publicly reinforced the ban, which was introduced by Iran’s ruling clerics after the 1979 Islamic revolution. In March, 35 women attempting to sneak into Azadi Stadium for a match between two Tehran clubs were detained by authorities. A day later, FIFA President Gianni Infantino, who was present at the match, told reporters that Iranian President Hassan Rouhani had “promised that women in Iran will have access to football stadiums soon.”