"I spoke with assistants of Prosinecki about Azerbaijan" 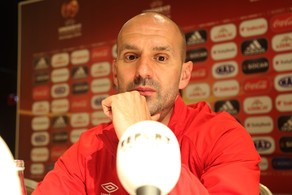 "We are very pleased with what we have seen in Baku. Meals, hotels and training grounds are good. Our players are ready for the championship. There is no football player with damage or any problem."

Serbian U-17 national team coach Ilija Stolitsa said that, speaking about the European Championships which starts in Baku today. 37 year old specialist said that each team has a chance to step up: "Because both Italy and the Netherlands, as well as the national teams of Spain are very strong. I believe that each team will show an exciting match. I can not say exactly what place we will win, but we're going to win every match".

Ilia Stolitsa said that he spoke with assistants of Head Coach of Azerbaijan's National Football Team Robert Prosinecki: "I have general information about Azerbaijani football. I know that football in Azerbaijan raising step by step".

Note that Serbian national team will play against Italy in the first match on 6 May.