Judo Grand Slam tournament may be held another 4 years 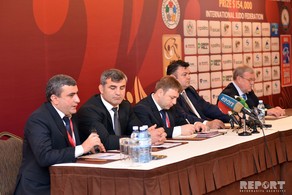 Press conference has been held in regard with the Judo Grand Slam tournament, which will be held in Baku.

He stated that Grand Slam is of great importance to the judokas all over the world: 'Winners and prizers of Olympic Games, World and European championships will participate in this competition. Azerbaijan has already won European, world and Olympic championships. We observe great development in your country compared to previous years. I would like to express my gratitude to your federation, Ministry of Youth and Sports and to sponsors. In addition, many volunteers will help us. I believe in high-level competition during 3-day tournament'.

Head of Referees Committee Berd Axiles stated that preparation for the competition is at high level. He noted that most of the referees will also manage meetings at Rio 2016 Summer Olympic Games. B.Axilles said that 14 referees will manage the contest.

AJF Secretary General Elmar Babanli expressed his gratitude to the IJF for trusting Azerbaijan to host such a prestigious contest as Grand Slam tournament. He said that talks will be held to organize the tournament in Baku another 4 years.

Coach of the Azerbaijani judo national team Movlud Miraliyev stated that preparation for the competition is at high level.

Notably, the Grand Slam will start on May 6. The competition will last for 3 days.