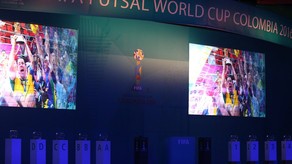 Date of matches of Azerbaijani national futsal team at world championship, which will start in Colombia on September 10, has been identified.