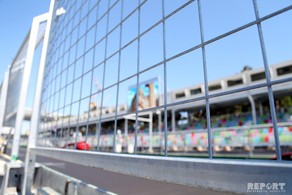 The latest preparation work for the Grand Prix is underway.

The bleachers are already installed, the territory of pit-stop and paddock also ready.

Located opposite the pit-stop 5-storey podium is considered for the audience of 5000 seats. For people with disabilities, who want to watch the races, 24 special seats reserved.

Fans of the “royal races” will be able to meet the Formula 1 drivers and get their idols’ autographs on all four days of the Grand Prix of Europe race weekend in Baku. All the meetings with the drivers will be held on the F1 village stage, which is behind the Absheron Grandstand.

The autograph sessions begin on Thursday 16 June, when all fans will be able to meet drivers from the Ferrari, Mercedes, Red Bull Racing and Toro Rosso teams.

Baku City Emergency and Urgent Medical Aid Station have made all the brigades of doctors fully ready for the upcoming Formula 1 race.

At his words, 12 brigades are intended for athletes, 6 for spectators and guests. 9 brigades of doctors will operate on an ambulatory basis. Doctors will offer medical service at 9 medical stations in places where the race will be held.

Moreover, a common station has been created for athletes in the area. Highly qualified surgeons, traumatic surgeons, and neurologists will also operate.