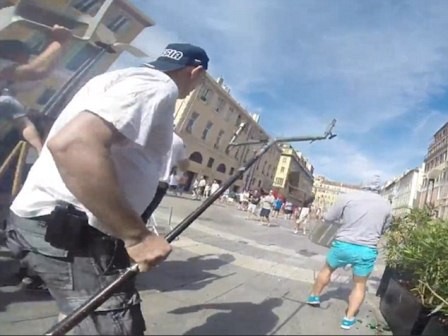 The violent scenes broke out before, during and after the meeting between the two teams in Marseille at the 2016 Euro Championships on Saturday.

The clip posted to LiveLeak shows the Russians running to punch and kick England fans in the town centre, as well as throwing bottles and ripping flags.

The Russian man recording the footage can be seen stomping on another man's head at one point.

Six England fans have been jailed over the violence in which at least 35 people were injured.

Marseille's chief prosecutor Brice Robin yesterday confirmed a group of 150 Russian attackers were behind the majority of the violence, and had brought fighting equipment with them.

Mr Robin described the men as "hyper-rapid and hyper-violent" and warned fans across the tournament to be vigilant to the dangers.

Meanwhile, a Russian football official told hooligans from his country to "keep it up", referring to the violence they had incited.