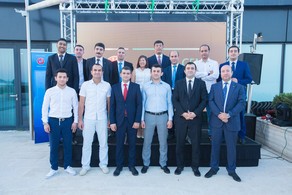 The last seminar was held in Baku on "UEFA Certificate in Football Management" training courses.

Upon completion of trainings, the participants took an exam and were awarded with certificates. President of "Sumgayit" FC Kamran Guliyev and Vice-president of "Khazar-Lankaran" FC Tuygun Nadirov are also among the certificate awardees.

The goal of the program is to increase the knowledge of sport, especially football management among UEFA members and partners

Program is organized with the support of Swiss Graduate School of the Public Administration and held in different UEFA's member countries.