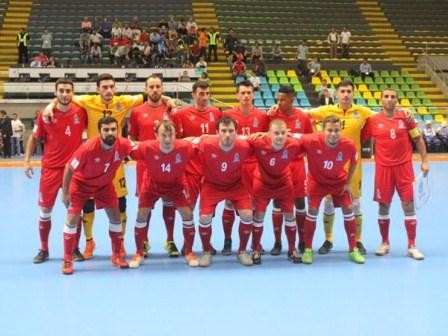 Azerbaijan and Iran shared an exciting 3-3 draw on Sunday with the result seeing both teams advance from Group F in second and third place respectively.

On three occasions the two teams exchanged goals in quick succession with neither able to gain a break on their opponents, in what was an entertaining contest in Medellin.

Iran entered the contest trailing their rivals on goal difference, and perhaps it was they who seemed marginally more enterprising in attack during the early stages.

Indeed Iran opened the scoring just a minute into the contest after some great combination play ended with Ahmad Esmaeilpour firing high past an exposed goalkeeper. However, and in keeping with what was to be a theme, Azerbaijan quickly drew level as Gallo corner volley was deflected into the net.

The match settled into an entertaining and fast-tempo affair, with Mehran Alighadr hitting the post for Iran, while at the other end Eduardo pinged a shot against the crossbar after attempting to lob the keeper.

The second half commenced just like the first half with an exchange of goals. Farhad Tavakoli converted at the second attempt for Iran, while the always lively Gallo fired home with hard direct shot after a corner.

Azerbaijan were arguably having the better of the second half and went ahead through Gallo only for Iran’s Hossein Tayebi to end the scoring.

Iran, seeking to leapfrog their opponents into second, played with a flying goalkeeper in the latter stages and were nearly rewarded for their endeavour as Esmaielpour hit the post and Javid narrowly failed to convert the follow-up.