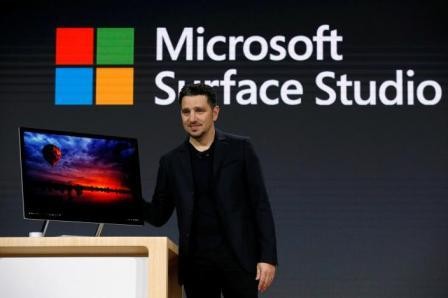 Microsoft Corp (MSFT.O) on Wednesday announced a free update to its Windows operating system that lets users take photos and edit content in three dimensions, in an effort to bring excitement to its declining computing business.

The Windows 10 Creators Update, coming in early 2017, lets users on mobile devices take three-dimensional photos by scanning an object as they walk around it. It also allows for 3D graphics in Microsoft's popular PowerPoint presentation software, and a new "Paint 3D" application lets people edit photos and other designs in three dimensions.

The new features show Microsoft is hoping to stand out from the pack as rival Apple Inc (AAPL.O) has eroded its grip on software.

"3D creation is a tough thing to simplify, but Microsoft's attempt ... is the best effort I have seen to date," Patrick Moorhead of Moor Insights & Strategy wrote in a research note.

Shares of Microsoft were down slightly in early afternoon trading.

Terry Myerson, executive vice president for Microsoft's Windows and devices group, said the update was tailored for gamers who are increasingly interested in augmented and virtual reality experiences.

Virtual reality accessories for the update will start at $299, Myerson said.

"We are building Windows for each of us (and enabling) people to experience computing in new ways," said Chief Executive Officer Satya Nadella.

The technology company also announced a new desktop computer, the Surface Studio, that it is marketing to designers for its touch-screen capabilities at $2,999 and up. Microsoft also said it would introduce a new Surface Book laptop whose battery life is 30 percent longer at 16 hours.

The new products come as Microsoft's Windows and computing business is struggling.

Revenue for the unit fell 1.8 percent last quarter to $9.29 billion, Microsoft said on Thursday. It forecast the division's sales at up to $11.6 billion for this quarter, well below year-earlier results of $12.7 billion.

Nonetheless, Microsoft is riding high on its fast-growing cloud business, which companies can use to host their websites, apps or data. Shares of Microsoft have doubled since August 2013, with Nadella restoring investor confidence by focusing on mobile and cloud computing rather than PCs.