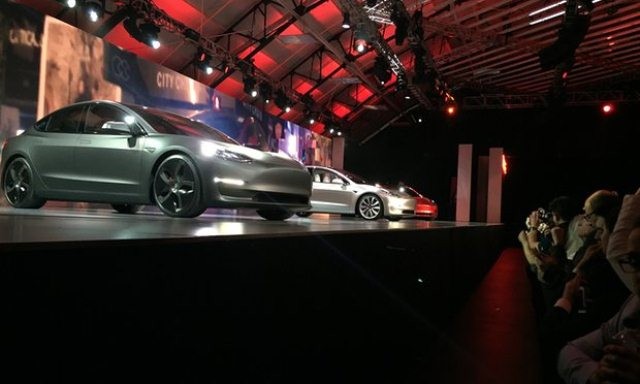 Tesla Motors has finally unveiled its long-anticipated lower cost electric car, the Model 3, at its design studio in Los Angeles.

Costing $35,000 and up, before government incentives, the Model 3 is less than half the cost of Tesla’s previous Model S and Model X SUV and aimed at the mass market. The car will go at least 215 miles (346km) on a full charge, which is around 85 miles less than the more expensive Model S, but about double what drivers of competitors cars costing similar, such as the Nissan Leaf and BMW i3.

The Model 3 looks like a shorter version of the Model S, with a similar sleek profile, elongated hood and a panoramic glass roof. It will seat five adults, has the same large touchscreen panel on the centre console, Tesla’s AutoPilot self-driving features and will reach 60mph from a standstill in six seconds.

The Model 3 won’t go on sale until the end of 2017, but already had 115,000 of pre-orders before the unveiling and tens of thousands of buyers putting down deposits of $1,000 each. The company experienced long lines of buyers, similar to those found at flagship smartphone launches, at its stores around the world.