An asteroid will approach Earth this week 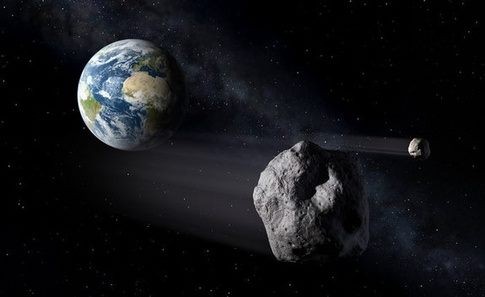 A 30-metre asteroid is expected to zip past Earth between March 5 and 8, and asteroid 2013 TX68 is by no means a threat.

"There is no concern whatsoever regarding this asteroid - unless you were interested in seeing it with a telescope," says Paul Chodas, manager of NASA's Centre for Near-Earth Object Studies (CNEOS). "Prospects for observing this asteroid, which were not very good to begin with, are now even worse, because the asteroid is likely to be farther away, and therefore dimmer than previously believed."

The closest asteroid 2013 TX68 is expected to get to Earth during this week’s flyby is around 5 million kilometers (3 million miles), and while there's a chance that its orbit could get it closer than that, the absolute minimum distance between us and that whale of a space rock is 24,000 kilometers (15,000 miles), so your doomsday bunker can stay locked for another day.

While the exact distance from Earth asteroid 2013 TX68 will reach this week is up for debate, depending on how you interpret the data we have on its trajectory, its danger-factor is unequivocally zero.

"We already knew this asteroid, 2013 TX68, would safely fly past Earth in early March, but this additional data allow us to get a better handle on its orbital path," said Chodasin a NASA press release. "The data indicate that this small asteroid will probably pass much farther away from Earth than previously thought."

In fact, NASA has announced that while the asteroid is of note because of its scheduled flyby, there is no way it can impact Earth for at least the next century. We’ll 'see' it again around 28 September 2017, when it’ll have less than a 1 in 250 million chance of impacting us. We like those odds.