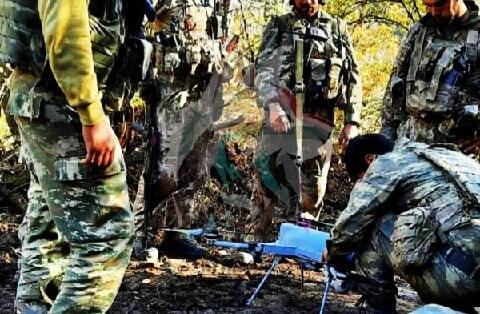 According to the claim of the Armenian officials, the well-known video was shot on September 13 - that is, the soldiers of the Azerbaijani Army, who took the post at the height of the fighting, shoot Armenian soldiers.

Axar.az reports that in that video, which was "shocked" by the whole world and circulated by the biggest media organizations, it is clear that the Armenians were not captured at all, their hands were not tied, and the battle was going on.

It is still debatable whether the video is real or not.

However, Armenians committed terrible acts against Azerbaijani soldiers who were captured in the Second Karabakh war, and as Azerbaijani media, we did not publish them. If the video used immorally by Armenians and the world was "amazed" is a simple battle episode (we repeat again: the Military Prosecutor's Office is investigating the video and it is still being clarified whether it is real or fake), in the video that we are going to present, an Azerbaijani soldier is tied with his hands and arms, taken hostage, we are talking about a soldier of the Azerbaijan Border Service with a sock stuck in his mouth.

It seems that we have made a mistake: now we are obliged to show the world another side of Armenian brutality, bloodshed, and war crimes so that the world can compare these two facts. The first one is about eliminating the enemy who lifted their hands after firing their last shots in the battle and were not taken prisoner. The second fact is bout beheading the prisoner with his hands and arms tied.

Which is more terrible? Who is a bloodthirsty, war criminal, murderer and fascist?

The Azerbaijani Army is an Honorable, Victorious, Victorious Army that liberated its land from the enemy, it does not engage in occupation-terrorist activities like the Armenians; During the 44-day war, it was the Armenian army that attacked peaceful cities hundreds of kilometres away from the war zone at night, and the Armenian military-political leadership committed this crime.

The Azerbaijani Army does not kill the enemy in non-combat conditions, even when they capture saboteurs, they behave humanely towards them.

The Azerbaijani soldier bandaged the wound of the wounded Armenian soldier and admitted him to the hospital when the fighting stopped, and there is evidence of this.

If the battle is going on, how and on what basis should he capture an Armenian soldier with open arms and hands? How could an Azerbaijani soldier under the rain of bullets determine if those "captives" were up to commit a provocation or not?

P.S. Beware of the sensitive content, the video includes violence and brutality.

P.P.S. This is just one of the hundreds of images of Armenian brutality...