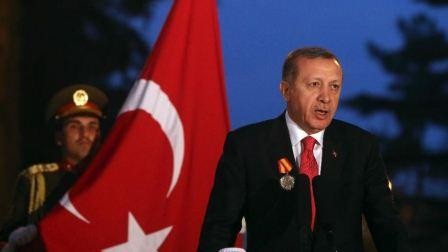 Erdogan's comments, in a speech in New York on Thursday, are likely to add to tensions between Turkey and Washington over U.S. support for Kurdish YPG forces involved in operations against Islamic State fighters.

Turkey is part of the U.S.-led coalition against Islamic State but views the Syrian Kurdish YPG and its PYD political wing as an extension of Kurdish militants who have waged a three-decade insurgency on its own soil.

"If you think you can finish off Daesh with the YPG and PYD, you cannot, because they are terrorist groups too," Erdogan said in comments broadcast on Turkish television, using an Arabic acronym for Islamic State.

"Three days ago America dropped two plane loads of weapons in Kobani for these terror groups," he said, adding he had raised the issue on Wednesday with U.S. Vice President Joe Biden who he said had no knowledge of this.

The United States, which sees the YPG as a major strategic partner in the fight against Islamic State in Syria, air-dropped weapons to the group in the largely Kurdish town of Kobani in 2014. Erdogan said that half of those arms were seized by Islamic State fighters.

Kobani was besieged by Islamic State for four months in late 2014 and is about 35 km (20 miles) east of the Syrian border town of Jarablus, which Turkey-backed rebels seized a month ago in an operation dubbed "Euphrates Shield".

That operation is designed to clear Islamic State fighters from Turkey's southern border area but it has also brought Turkish and Syrian rebel forces into conflict with the YPG.

Erdogan's spokesman Ibrahim Kalin on Thursday ruled out the possibility of Turkey joining an operation by coalition forces against Islamic State militants in their stronghold of Raqqa if the YPG also takes Kurdish fighters also take part.