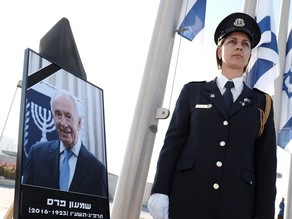 Jerusalem hosts today a farewell to the former President and Prime Minister of Israel Shimon Peres. Acoffin with the body of Shimon Peres delivered in Jerusalem this morning.

President Reuven Rivlin has interrupted a visit to Kiev because of the death of Peres, Prime Minister Benjamin Netanyahu, head of the parliamentary opposition, Isaac Herzog and Speaker of Knesset Yuli Edelstein laid flowers and wreaths at his coffin.

Even today, foreign visitors will begin to arrive in Israel to participate in his funeral on September 30. Airport officials said, at least 60 aircraft with participants of the funeral ceremony will arrive in the country.

The farewell ceremony will continue tomorrow. Funeral of Shimon Peres will begin at 12:00, and to be completed at 13:30.

In order to ensure security and order during events were involved at least 7,000 police officers and soldiers of the IDF, border guards (the magician), the staff of the general security service (Shin Bet) and the representatives of all the power structures of the country.