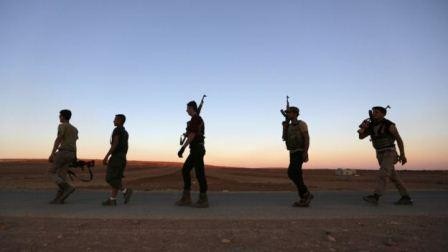 Russia's increasing military action in Syria is forcing moderate elements within the Syrian opposition into the hands of extremists, a US state department spokesman has said.

Axar.az reports referring to the BBC, Mark Toner said renewed Russian and Syrian air strikes were making a difficult situation "more confused".
The US says it may end co-operation with Russia over its action in Syria.

But Russia has accused the US of trying to spare a jihadist group in its bid to oust Syria's President Bashar al-Assad.

Russian Foreign Minister Sergei Lavrov said the US had broken its promise to separate the powerful Jabhat Fateh al-Sham (formerly known as al-Nusra Front) and other extremist groups from more moderate rebels.

Mr Toner said the Russian allegations were "absurd". He told reporters that the US had not targeted al-Nusra for months because they had become "intermingled" with other groups and civilians.

He said a recent attack on an aid convoy, which the US blames on Russia, and renewed air strikes on Aleppo were driving moderate rebel groups closer to the extremists.

"What has happened now, with the hitting of the humanitarian convoy and with the subsequent siege on Aleppo, you've got a scenario now, a dynamic where, as these moderate opposition forces are under increasing pressure from the regime, that they are driven into the arms [of al-Nusra], and they have to fight side by side," he said.

"It escalates, and makes more confusing, what is already a difficult situation."

On Friday, Syrian government forces and rebels fought in the centre of Aleppo and north of the city, a week into the Russian-backed offensive by the Syrian army to take the city and surrounding area.

Monitoring group the Syrian Observatory for Human Rights and a Syrian military official said government forces had captured territory north of Aleppo and buildings in the city centre, but rebel sources denied this.

Mr Lavrov made his comments on US broken promises during an interview with Stephen Sackur on BBC World News TV on the first anniversary of the beginning of the Russian air campaign in Syria.

"They [the US] pledged solemnly to take as a priority an obligation to separate the opposition from Nusra," he said.

"They still, in spite of many repeated promises and commitments... are not able or not willing to do this and we have more and more reasons to believe that from the very beginning the plan was to spare Nusra and to keep it just in case for Plan B or stage two when it would be time to change the regime."

The recent US-Russian cessation of hostilities deal was meant to lead to joint Russian-US air strikes on the Islamic State group and Jabhat Fateh al-Sham, which is linked to al-Qaeda.

But many of the more moderate rebel groups that the US backs have formed a strategic alliance with Jabhat Fateh al-Sham and now fight alongside it.

Mr Lavrov said: "We believe that the Russian-American deal must be put into effect. For this the only thing which is necessary is to separate the opposition from Nusra. If it is supported by the United States, not on paper but in real life, and then we will insist on an immediate cessation of hostilities."

The UN says 400 civilians, including many children, have been killed in the besieged city of Aleppo during the past week as a result of bombardment by Russian and Syrian government forces.