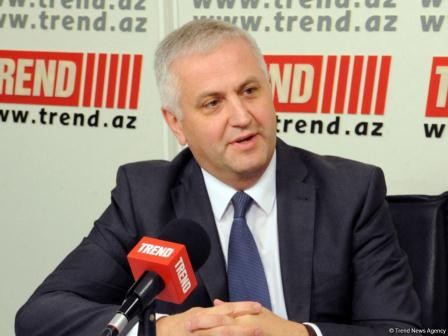 Lithuania and Azerbaijan always find new goals and interests for the development of cooperation in all areas, Lithuanian Ambassador to Azerbaijan Valdas Lastauskas told on Oct. 7.

He said that there are a lot of projects and initiatives, which have to be implemented in the trade and economic, transport and humanitarian spheres.

The government of Lithuania, in the first place, intends to revitalize the intergovernmental commission on economic cooperation with Azerbaijan, he noted.

The intergovernmental commission’s meeting was delayed several times for objective reasons, in particular, due to the parliamentary election in Azerbaijan in autumn 2015, the economic crisis in early 2016, and the current election to the Seimas (unicameral parliament) of Lithuania, Lastauskas said.

Lithuania hopes to hold the meeting before late 2016 or in early 2017 to discuss concrete projects and initiatives for cooperation, the ambassador said.

Lithuania and Azerbaijan highly appreciate close cooperation between the two countries, so the range of the issues to be discussed during the meetings is quite broad and will include the further development of trade and economic cooperation, collaboration in the fields of energy, he said.

The transport sector is one of the priority directions of cooperation between the two countries, he noted.

Projects of the Trans-Caspian international transportation route and the combined transport train ‘Viking’ open vast opportunities for Azerbaijan and Lithuania in the transport sector, Lastauskas said.

He went on to add that the connection of these two routes will allow unhindered transportation of goods from China to Northern and Western Europe.

New competitive tariffs on the Trans-Caspian corridor came into force on June 1, 2016.

In general, there are no barriers for the further development of relations between Lithuania and Azerbaijan, Lastauskas said.

The Lithuanian Embassy’s task is to find ways and opportunities for those who wish to establish business relations with Azerbaijan, the diplomat said.