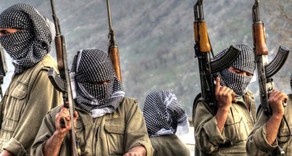 One soldier was killed and six others were injured in Silvan district of southeastern Diyarbakır province on Monday as PKK terrorists opened fire on security forces carrying out field scanning.

According to the Milliyet, initial reports said that rocket-propelled grenades were used in the attack.

Back-up forces were dispatched to the area with helicopters after the attack, and an air-backed operation was launched in the area.

Turkish government has intensified its counter terror operations following the recent attacks carried out by the PKK.