Sargsyan is required to interrogation 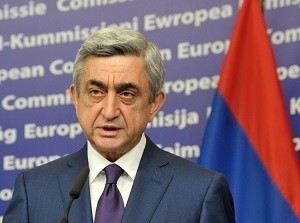 The head of the Vanadzor office of the Helsinki Civil Assembly Artur Sakunts appealed to the Chief Prosecutor's Office of Armenia demanding to question the President of Armenia Serzh Sargsyan on the terrorist attack in the Armenian parliament on October 27, 1999.

On the eve of the head of "Republic" party Aram Z. Sargsyan during his speech on the First Information channel, speaking about the terrorist attack in the Armenian parliament on October 27, 1999, he said that in his time Serzh Sargsyan confessed that one day will tell him who organized crime.

According to Sakunts, Serzh Sargsyan stated a very important fact, which can not remain without consequences.

"According to the statement, the main official dignitary government concealed information about a crime, which is a criminal offense. This is a new circumstance, and the public prosecutor is obliged to instruct the National Security Council to take action on the case for this application - immediately interrogate Serzh Sargsyan. In addition, the National Assembly should be convened a special meeting, and Serzh Sargsyan is obliged to submit an explanation", - Sakunts said in an interview with the First Information channel.

The application of the same claim on behalf of the head of the Vanadzor office of Helsinki Civil Assembly Artur Sakunts submitted to the RA Prosecutor's office.