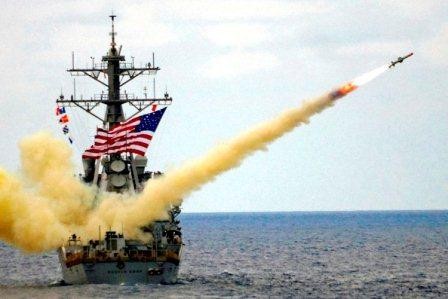 The strikes followed two incidents this week in which missiles were fired at a U.S. Navy ship from a rebel-controlled area of the country.

The missiles were launched from the destroyer USS Nitze at around 4 a.m. Thursday local time (9 p.m. Wednesday ET), and initial assessments were that all three coastal sites in rebel Houthi-controlled areas were destroyed, the official said.

Pentagon press secretary Peter Cook said in a statement that President Barack Obama authorized the strikes on the recommendation of Secretary of Defense Ash Carter and Chairman of the Joint Chiefs General Joseph Dunford.

"These limited self-defense strikes were conducted to protect our personnel, our ships, and our freedom of navigation in this important maritime passageway," Cook said. "The United States will respond to any further threat to our ships and commercial traffic, as appropriate, and will continue to maintain our freedom of navigation in the Red Sea, the Bab al-Mandeb, and elsewhere around the world."

The Pentagon on Tuesday vowed to retaliate after a pair of missiles were fired at the Navy destroyer USS Mason Sunday as the ship was in international waters near the Bab el-Mandeb Strait.

On Wednesday, a coastal defense cruise missile was fired from a Houthi-controlled area south of Al Hudaydah at around 6 p.m. local time (11 a.m. ET). None of the missiles struck the ship, and there were no injuries, U.S. officials said.

Yemen is embroiled in a civil war between Shiite Houthi rebels fighting the government of President Abed Rabbo Mansour Hadi that broke out in March 2015.

At least 4,125 civilians have been killed in Yemen since then, the Office of the United Nations High Commissioner for Human Rights said on Monday. An agreement to cease hostilities collapsed in August, the U.N. agency said.