"Hit us again and you will get respond" 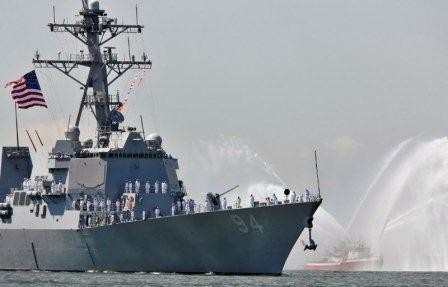 Hours after the US struck three radar installations in Yemen in response to attempted attacks on a US Navy destroyer, Pentagon officials made clear they'll hit back again if needed and Iran moved its own warships into nearby waters.

"We want to make crystal clear if you threaten our forces, if you threaten our ships, we'll respond," Pentagon spokesman Peter Cook said Thursday. He described the missile launches against the USS Mason as "a response to direct threats to our people, to our ships and we responded to that threat and we'll respond again."
Also Thursday, the Iranian navy deployed two warships into the Gulf of Aden in order to protect commercial vessels against pirates, according to the Tasnim News Agency, an Iranian news service with close ties to Iran's Revolutionary Guard Corps.

"With regard to the Iranian navy activities, I'll leave it to the Iranians to describe the disposition of those ships," Cook said. "We operate in those waters all the time."

Pentagon officials said initial assessments indicated the Tomahawk strikes destroyed all three targets, but the exchange of fire underscored the risks of US support for Saudi Arabia's war in Yemen, which the White House is now reviewing.

In the meantime, the war is fueling anti-American sentiment in the region, deepening considerable strains in the US-Saudi relationship and raising the risk of unintended flare-ups with Tehran.

"The war in Yemen is escalating and becoming more dangerous," said Bruce Riedel, director of the Intelligence Project at the Brookings Institution.

With its strategic location at the entrance to the Red Sea, extensive border with Saudi Arabia and desperately poor population, Yemen is "a military and civil strategic nightmare," according to Anthony Cordesman, a former state and defense department official at the Center for Strategic and International Studies.

A deadly mix of forces are competing within its borders, including small cells of ISIS fighters, separatist groups, tribal factions, al Qaeda in the Arabian Peninsula, Houthi rebels backed by Iran, forces linked to the former government and groups allied with Yemen's internationally recognized and Saudi-backed exiled leader.

The danger in Yemen is growing at a time when Congress has reduced US leverage with Saudi Arabia by passing legislation allowing US citizens to sue the kingdom for damages related to the attacks of September 11, 2001. Congress is also increasingly resistant to arms sales to Gulf nations, Riedel notes.

Referring to the Democratic and Republican candidates for president, Riedel added that "whether Clinton or Trump wins in November, they will inherit a damaged relationship in January."

Cook noted that two attempted missile strikes over four days against the USS Mason had posed a threat to that vessel and its crew. Those missiles had "originated from Houthi-controlled territory," Cook said, but he added that the Pentagon doesn't know who, exactly, "was pulling the trigger."

The attempted missile attacks on the USS Mason are believed to be Houthi payback for a Saudi-led coalition bombing of a funeral in Yemen's largest city on Saturday that killed 140 people.

The alliance of Houthi rebels and followers of the former president, Ali Abdullah Saleh, have been fighting for control of the country since 2014.

The war accelerated in March 2015 when Saudi Arabia, fearing the influence of its arch-rival Iran, led a coalition air campaign to support Yemen's exiled leader Abed Rabbo Mansour. The war has since killed almost 10,000 people according to the United Nations, which says that as many as 4,000 of those casualties were civilians.
The high level of civilian casualties at the hands of the Saudi-led coalition causes deep discomfort in Washington, administration officials say.

Vice President Joe Biden, speaking after a campaign event for Clinton, said the administration has "been pushing the Saudis as hard as we cannot, not to go in to Yemen and bomb in Yemen. But the Houthis are equally as bad. They're just firing on American ships as well. That's why we're working so hard to get a ceasefire and get a negotiated settlement."

The funeral strike prompted the non-profit group Human Rights Watch to call on the US to suspend arms sales to Saudi Arabia and for the international community to launch an investigation into possible war crimes there.
The US has sold Saudi Arabia over $111 billion in defense equipment and weaponry under President Barack Obama, and US and UK support have been crucial to the Saudi war in Yemen. "That makes them culpable in war crimes," Riedel said. He added that there's also a cost to the US image in the Middle East.

"The poorest Arabs are being blockaded by air and sea by the richest -- with our help," Riedel said.

The funeral attack prompted the White House to announce that it would review its backing for Saudi Arabia's operations in Yemen. Right now that support includes refueling, "advice and counsel on the conflict" and on how the Saudis conduct air strikes, Cook said, as well as intelligence sharing that Cook said has been reduced in recent weeks.

Deputy Press Secretary Eric Schultz said Thursday that the US calls on all parties in Yemen to deescalate violence. He stressed that the Tomahawk strikes were conducted in self defense, were limited in nature and were approved by Obama after a recommendation from Secretary of Defense Ash Carter.

The intent of the strikes was to deter further aggression against US assets in the region, Schultz said. It does not signal a greater US role in Yemen's civil war, nor will it distract from the mission against ISIS, he said.

Pentagon officials said that they have put more assets into the area for protection. "We have sufficient force to protect ourselves at all times," one defense officials said. The official wouldn't provide details.

He said that planning for the strike mission began right after the first attempt on the USS Mason, but it took a few days to verify the targets and move the USS Nitze and its Tomahawk missiles into place.

"We don't take it lightly," Cook said of the US decision to strike. "We don't seek a wider role in the conflict," Cook said. "This is about protecting our troops."