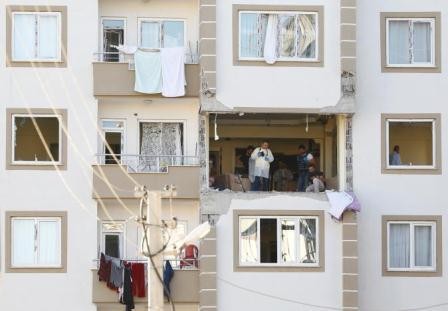 A suspected suicide bomber killed three police officers and wounded at least nine people in the southern Turkish city of Gaziantep on Sunday during a police raid on an alleged Islamic State safehouse, a local official and security sources said.

The bomber detonated explosives as police raided the house in the Besyuzevler neighborhood of the city, some 40 km (25 miles) from the Syrian border, Abdullah Nejat Kocer, a local member of parliament from the ruling AK Party, told reporters.

He said three police officers were killed. Six of the wounded were also police, two of them in a critical condition in hospital. The three other people wounded were Syrian nationals, Kocer told reporters.

Security sources earlier told Reuters that police had pursued a vehicle believed to be carrying explosives to the house, where a group of Syrian nationals were thought to be sheltering, before raiding it.

The privately-run Dogan news agency said police were raiding a second address in the city in connection with the blast, and that there were reports of further explosions and gunfire.

Turkey has seen a spate of suicide bombings by militants suspected of links to Islamic State. A suicide bomb killed more than 50 people, many of them children, at a Kurdish wedding in Gaziantep in August.

Turkey launched an incursion into Syria in August in support of Syrian rebels to try to push Islamic State from its border. The rebels said on Sunday they had captured the village of Dabiq from the jihadist group, a stronghold where it had promised to fight a final, apocalyptic battle with the West.

Turkish security forces have repeatedly raided houses in Istanbul, Gaziantep and other cities in a crackdown on suspected jihadists linked to Islamic State.