May holds talks with devolved nations 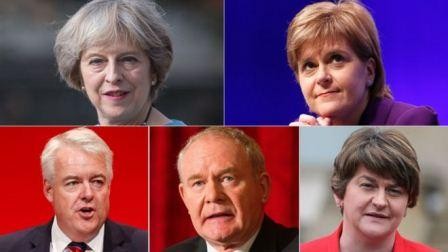 The prime minister is to offer the leaders of the three devolved governments a "direct line" to Brexit Secretary David Davis ahead of the UK's negotiations to leave the EU.

Theresa May is due to hold talks with the first ministers at Downing Street.

The Scottish and Welsh leaders want the devolved legislatures and Parliament to all have a vote on Mr Davis's approach.

Mrs May says she is "ready to listen" to their ideas but the final position must work for the whole of the UK.

The issue will be discussed as the joint ministerial council, bringing together the top politicians from England, Scotland, Wales and Northern Ireland, meets for the first time since 2014.

Speaking ahead of her talks with Scottish First Minister Nicola Sturgeon, Welsh counterpart Carwyn Jones and Northern Ireland's Arlene Foster and Martin McGuinness, Mrs May said: "The great union between us has been the cornerstone of our prosperity in the past - and it is absolutely vital to our success in the future.

"The country is facing a negotiation of tremendous importance and it is imperative that the devolved administrations play their part in making it work."

Downing Street is proposing that Mr Davis chair a new forum bringing together representatives from the devolved nations before the prime minister triggers Article 50, and formally starts the two-year Brexit process by March next year.

Mrs May said: "The new forum I am offering will be the chance for them all to put forward their proposals on how to seize the opportunities presented by Brexit and deliver the democratic decision expressed by the people of the UK."

Scotland and Northern Ireland voted to remain in the EU in the referendum last June, while Wales, like England, voted to leave.

But Mr Jones and Ms Sturgeon have both called for votes on the Brexit strategy, saying Article 50 should not be triggered until there is an agreed approach.

Ms Sturgeon has also said she wants to able to call a second referendum on independence if the UK government does not protect Scotland's links with the EU.

Meanwhile, all three leaders have stressed their desire to see continued participation in the EU single market - a situation that could be at risk if the UK pursued a so-called "hard" approach to Brexit.

However, Downing Street says the prime minister is expected to tell the leaders that, contrary to some speculation, no final decisions have been taken on her approach "and that how the UK leaves the EU will not boil down to a binary choice".

The talks come as a leading think tank warns the UK faces a "full-blown constitutional crisis" unless all nations of the UK agree on "core planks" of the government's approach to Brexit.

The Institute for Government warned imposing a Brexit settlement on Scotland, Wales and Northern Ireland may be legally possible but "if it proves impossible to find consensus... the result may be a serious breakdown in relations between the four governments (and nations) of the UK".