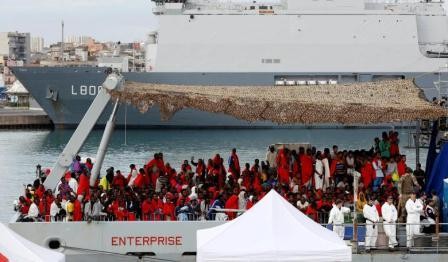 The European Union will go ahead with training for the Libyan coast guard this week, days after a coast guard vessel allegedly attacked a boat carrying migrants, causing four of them to drown.

The German humanitarian group Sea-Watch recovered the four bodies after an attack on Friday that its members say was carried out by a vessel with the markings of the Libyan coast guard.

"The aim was to start the training this week, and this week it will start," the spokesman for the EU's Operation Sophia, Antonello De Renzis Sonnino, told Reuters.

The bodies of the four migrants reached Palermo, Sicily, on Monday aboard the Norwegian rescue vessel Siem Pilot, which carried 1,100 rescued migrants and 13 other bodies.

A spokesman for the Libyan naval forces in Tripoli denied on Saturday that it had attacked the migrant boat but admitted it boarded the rubber dinghy.

Helped by Libya-based people smugglers, some 150,000 people have set off for Italy in unseaworthy boats so far this year. More than 3,100 died or disappeared during the crossing, making the Central Mediterranean the world's most dangerous border for migrants.

Since Friday, more than 6,000 men, women and children have been rescued at sea. Migrant rescues are often complicated in Libya, where the U.N.-backed Tripoli government is struggling to impose its authority.

To help stem the flow of migrants, the EU agreed earlier this year to train the Libyan coast guard, which currently lacks the personnel and equipment to patrol over 1,700 km (1,056 miles) of coastline.

Beginning with up to 100 people this week, the EU aims to train around 1,000 Libyan coast guard members in total.

A Palermo court has opened an investigation into the incident, prosecutor Maurizio Scalia told Reuters from the port, where the bodies were taken off the Siem Pilot in brown coffins.

"We will collect all the statements," Scalia said, adding that it would take time to interview some of the 120 survivors from Friday's incident, who were also on board the Siem Pilot.

Sea-Watch, one of several humanitarian groups operating rescue vessels in the Mediterranean, estimated some 150 were on the rubber boat before a Libyan coast guard vessel swooped in and prevented the Sea Watch vessel from rescuing the migrants.

Then at least one Libyan man boarded the rubber boat and beat the migrants with sticks, sparking a panic that caused many to fall into the sea, Sea-Watch said.

The Libyan vessel then left the area, leaving Sea-Watch to conduct the rescue. Although four bodies were recovered, the Sea-Watch crew said it saw others it could not retrieve.

"As long as it cannot be guaranteed that all units to be trained will abide by human rights standards, cooperation in training military forces should definitely be stopped and reviewed," Sea-Watch spokesman Ruben Neugebauer said.

It was the second incident since August involving Libyan naval forces. In August, a Libyan ship fired on a rescue boat operated by Doctors Without Borders.

The German government, who is also participating in the training, said a Libyan investigation blamed the August incident on "inexperienced" and ill-trained personnel [L8N1CS06D].

Western governments are backing Libya's Tripoli government, hoping it can unite rival factions and help better coordinate efforts to combat Islamist militants and migrant smugglers, who both have profited from Libya's chaos.