Decision on talks with EU should be taken by Turkey 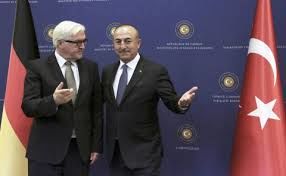 “Whether Turkey grows closer or distances itself from the EU is not a decision that can be taken in any European capital. It is a decision that needs to be taken by Turkey,” Steinmeier said at a joint news conference with his Turkish counterpart Mevlut Cavusoglu.

“I personally favor a good and close cooperation based on trust ... I wish these relations to continue,” said.

Steinmeier was speaking in Ankara a day after EU foreign ministers struggled to forge a common stance on Turkey amid deepening concerns about rights abuses, and the Turkish President Recep Tayyip Erdogan suggested calling a referendum next year on whether his country should join the bloc.