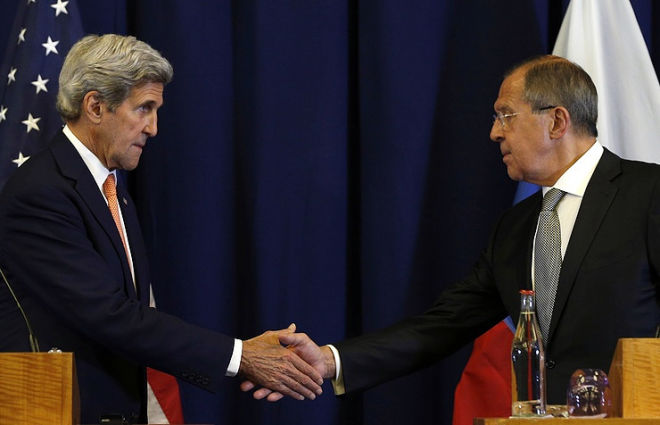 Russian Foreign Minister Sergey Lavrov and US Secretary of State John Kerry continues telephone talks on the problem of the Syrian settlement, the Russian foreign ministry said on Friday.

"Following Thursday’s talks on the sidelines of the APEC forum in Lima, Peru, the two top diplomats continued the discussion of the Syrian settlement problems with a focus on the situation around Eastern Aleppo," the ministry said.

According to the ministry, the telephone conversation was initiated by the US side.

The situation in Syria was in focus of Lavrov’s meeting with Kerry in Lima. "These contacts produce results, but everything is stalled by the same problem that once prevented the Americans from fulfilling our bilateral agreements - (the problem of) separating the so-called moderate opposition from al-Nusra," Russia’s top diplomat said.

"There is mounting evidence, and we cannot escape this impression that the dominating decision is to preserve Al-Nusra as the strongest force that opposes (Syrian President Bashar) Assad, regardless of the fact that it was put on all terrorist lists in the United States, Russia and the United Nations," Lavrov said. "At the same time, we would try to find some solutions to this situation. It appears to me that John Kerry is truly interested in it," the minister added.