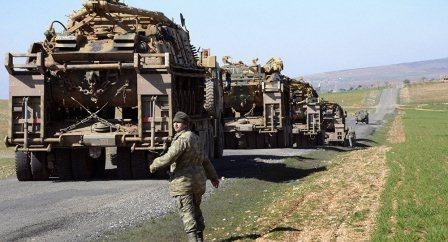 The Turkish armed forces have begun deploying tanks and other armored vehicles to the Silopi area of Sirnak province near the border with Iraq, military sources said on Tuesday.

The sources did not give a reason for the deployment, but President Tayyip Erdogan said on Saturday Turkey was aiming to reinforce its troops there, saying Ankara would have a "different response" for Shi'ite militia groups if they "cause terror" in the Iraqi city of Tal Afar.

Photos from the military sources showed a long column of vehicles, including tanks, tank rescue vehicles and construction vehicles in single file on a dual carriageway.

The deployment coincides with an Iraqi operation to drive Islamic State from the northern Iraqi city of Mosul and after Iraqi Shi'ite militias launched a related offensive to push the jihadists out of the town of Tal Afar further west.

Ankara has warned against such a move toward Tal Afar, which is some 170 km (106 miles) from Silopi and home to a sizeable ethnic Turkmen population with historic and cultural ties to Turkey.

Sirnak province, where Silopi is located, is also one of the main areas of conflict between the Turkish military and Kurdistan Workers Party (PKK) militants, who have bases in northern Iraq.