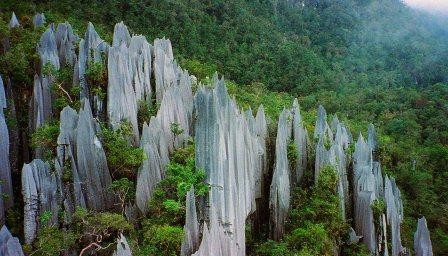 An Australian backpacker missing in the Malaysian jungle has been found alive, but emaciated and covered in leeches.

Andrew Gaskell was found by Malaysian search and rescue crews in the Mulu national park on Tuesday. He said he had survived by drinking water and eating wild ferns in the jungle.

He was reported missing to Tasmania police when his family did not hear from him after he set off hiking in the Sarawak park, with poor mobile coverage, from 18 October.

The 25-year-old is being assessed in a Malaysian hospital, Tasmanian police said in a statement on Tuesday night.

"By the end of it I was quite concerned I wouldn’t make my 26th birthday," he said in a radio interview, where he apologised to his parents.

Gaskell said he got lost after descending a mountain at sunset into bushland where there were a lot of different trails. "I ended up spending that whole night just wandering," he told ABC radio.

"If I had a GPS or navigational equipment I would have been fine. That was extremely stupid of me, really."

Gaskell said his feet were injured and it was very difficult to walk. "My nails are infected and I’ve been bitten by a lot of things."

He was found conscious and able to speak to his rescuers, but emaciated and with leeches on his legs, the Borneo Post reports.

His mother Elizabeth Gaskell said she "felt amazing relief" when her youngest son phoned to tell her Andrew had been found.

"I spoke to my son [Ben] first, he said ‘he is alive, weak but alive’," Gaskell told the Hobart Mercury.

"I’m really thankful to all the volunteers that helped and I’m so thankful to God he’s safe," she said in a statement to Sky News.

Gaskell was thin and weak and had an injured foot but was flown by helicopter to the town of Miri and was expected to recover, Marudi said.

"It was very lucky for him to be found still alive after such a long time," said Marudi, adding he had no further details on how Gaskell survived.

Mulu National Park is a Unesco world heritage site famed for some of the world’s largest caves, striking limestone karst pinnacles above ground and dense jungle.