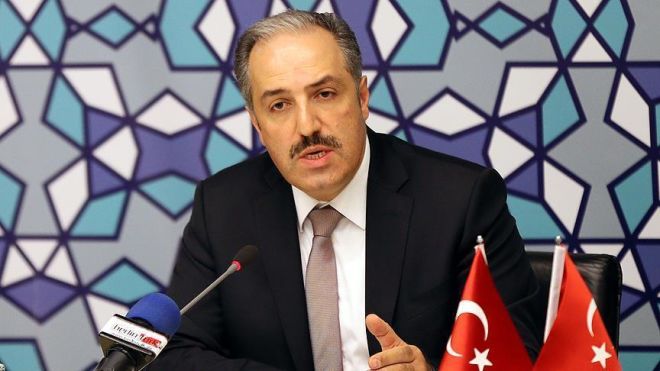 Mustafa Yeneroglu, who arrived in Berlin from London, reiterated a common theme that PKK terrorists use Germany to recruit, raise money and spread propaganda.

“The PKK is using Germany as a platform for its recruitment, funding activities, as an area to retreat,” he told reporters at a news conference. “This is not a fabricated claim, rather this is something explicitly mentioned in the reports of Germany’s domestic intelligence agency.”

According to the annual report of the BfV released in June there are more than 14,000 PKK members in Germany and the group, which is listed as a terror organization by the EU, raised more than 13 million euros ($14.3 million) in Germany last year.

The BfV said that despite the PKK being banned in 1993, it has run propaganda and fundraising through cultural organizations.

The PKK has fought a decades long war with the Turkish state that has resulted in more than 44,000 deaths. Following a two-year break in violence as the government and the PKK leadership explored peace talks, the group resumed its armed campaign in July last year.

Yeneroglu, a lawmaker with Turkey’s governing Justice and Development (AK) Party, also criticized Germany for its failure to take action against the PYD, the PKK’s Syria-based affiliate.

“Germany’s domestic intelligence agency views the PYD as the Syrian offshoot of the PKK,” he said. “As you know, the PKK is outlawed in Germany. But German authorities still remain silent to the PYD’s move to open a representation in Berlin.”

Ties between Germany and Turkey have been strained in recent months as Ankara demands action against not just the PKK but also members of the Fetullah Terrorist Organization (FETO) that it accuses of involvement in the July 15 coup attempt.

“What would be the reaction of Germans if a terror organization targeting Germany would have operated from Netherlands?” Yeneroglu said. “Then, how would Germany’s relations with the Netherlands be?”

He argued that FETO was a threat for every country where the group has a presence.