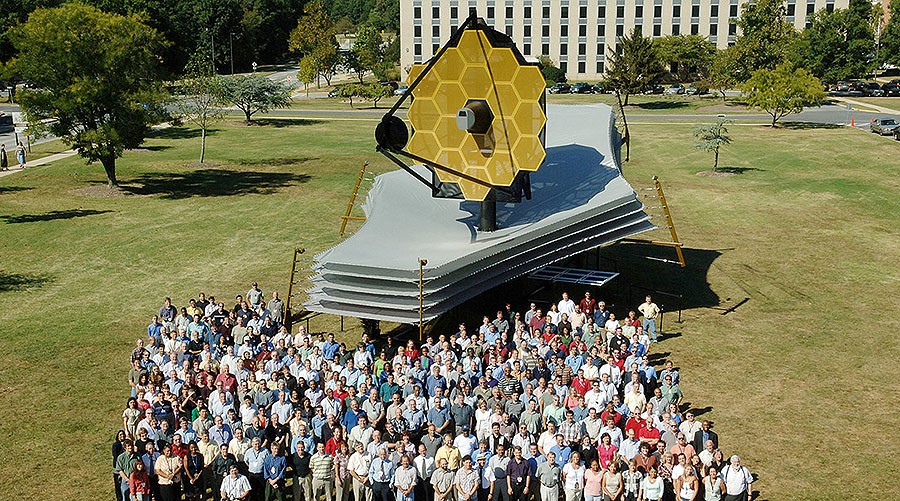 The James Webb Space Telescope (JWST) has finally been unveiled at NASA. The fruit of 20 years’ labor, its 18 mirrors will peer further into space than any existing ground or space-based telescopes.

More than 20 years has been spent developing the machine, with its dazzling signature honeycomb look. The mirrors will correct infrared light and peer further into space than any of its contemporaries, including the Hubble Space Telescope, which the JWST succeeds.

"Today, we’re celebrating the fact that our telescope is finished, and we’re about to prove that it works," senior project scientist John Mather was cited by Space.com as saying on November 2, as the device was unveiled at NASA’s Goddard Space Center in Maryland. "We’ve done two decades of innovation and hard work, and this is the result – we’re opening up a whole new territory of astronomy."

While the Hubble has undoubtedly given us a wealth of material that humanity has been analyzing for decades, the JWST will outgun it by far. The primary reason is that the size of its mirror panels is seven times that of the Hubble’s. The other main improvement is its ability to collect infrared light, which the Hubble is incapable of because heat emitted by Earth, the Sun, and the telescope itself obscures its vision.

The JWST, on the other hand, operates at temperatures near absolute zero and packs a tennis court-sized sun shield to screen it from infrared light. It will be put into orbit at what’s called Lagrangian Point 2, where the Earth will be directly between it and the Sun at all times.

The telescope will also be able to see through all the space dust into the first galaxies ever created, analyze the atmospheres of distant exoplanets, and find thousands more than we’re able to detect today.

Consequently, the JWST is perfectly suited for searching for planets capable of supporting life, with one contender less than five light years away. Its resolution is so high that Mather says it would be able to spot a bumblebee at a distance from Earth to the Moon, and could pick up the bee’s body heat as well.

The JWST will now be tested for about two years before being sent into orbit. Its launch was pushed back from its original planned date in 2014 because it would have cost $5 billion and was riddled with hiccups and financial constraints. Currently, the JWST is expected to be blasted into space in October of 2018.

"Some of you that have followed JWST know that it almost didn’t happen, and it’s mainly because of the people that are sitting here, able to talk to you today, that we’re all here and within two years of launch," NASA administrator Charles Bolden said at a NASA news conference.

"It’s critically important to get it right here on the ground, and that’s the purpose for the tests that we’re doing here and, most importantly, for the tests when we get it down to Johnson [Space Center] in Chamber A, the big vacuum chamber," Bolden went on.

"[We need to] make sure it can, in fact, be focused, so that we don’t find, as we did with Hubble, that we don’t have the ability to do what we thought it was going to be able to do," he said. The JWST is equipped with rotating mirrors that can be adjusted without the need for installing a corrective lens.

Once the it is launched, the telescope will gracefully unfold its 6.5-meter panels over the course of two weeks, as it is too large to be launched fully unfurled.

According to Mather and Bolden, the new telescopic beast will collect data for five years, but have enough fuel for 10. There is hope that it will last beyond its projected lifespan. However, even after launch, scientists will have to wait another six months before it starts collecting data.

Mather recalled the "seven minutes of terror" of the immensely complicated Mars Curiosity Rover landing, and added: "This is six months of terror."

The JWST will have plenty to look at, and scientists should be very excited, given that just two weeks ago they discovered that the universe contained trillions more galaxies than previously thought after analyzing years of deep space images from the outgoing Hubble.