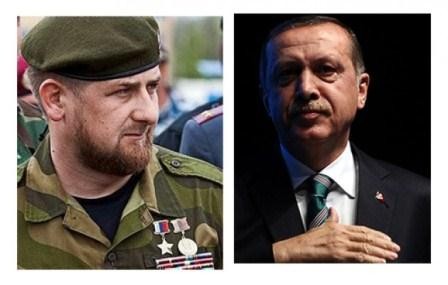 Chechen leader said the men detained in Turkey - Mahran Saidov, Aslanbek Vadalov and Tarhan Gaziyev - are the leaders of terrorists behind the crimes in Chechnya.

"Chechnya together with all Russian people hailed your decisive steps aimed at maintaining peace, stability, preventing a state coup and eradicating terrorism. The detention of dozens of dangerous criminals signals the firmness of your intensions. I make a request to you to allow the extradition of the gunmen," Kadyrov told the Turkish president.

Kadyrov said the men detained in Turkey - Mahran Saidov, Aslanbek Vadalov and Tarhan Gaziyev - are the leaders of terrorists behind the crimes in Chechnya. "There is reliable data that each of them had organized and committed numerous terrorist attacks, the killings of the military, police personnel and civilians," he said.

The Chechen leader voiced hope that Russian Prosecutor-General’s Office will soon send the documents to Turkey’s authorities for launching the extradition process. He also stressed that Chechnya welcomes the thaw in relations between Russia and Turkey. "We were very enthusiastic about the restoration of good neighborly relations between Russia and Turkey thanks to you and Russian President Vladimir Putin.".