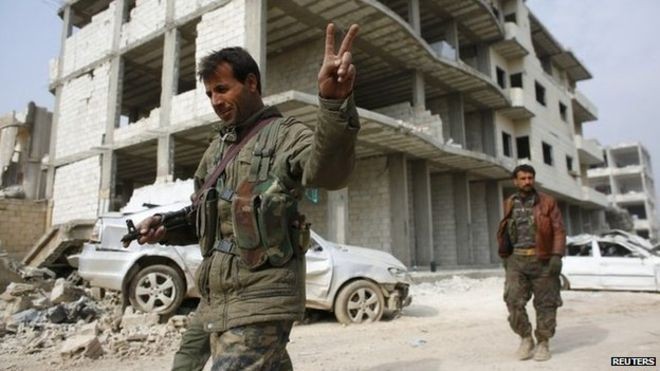 Turkey said Tuesday that the U.S.-backed and Kurdish-led forces leading an assault on the Islamic State stronghold of Raqqa should not enter the city itself but merely help encircle it, a suggestion dismissed by the Kurds.

The dispute between the two U.S. allies threatens to complicate efforts to drive IS out of Raqqa, the de facto capital of the extremist group's self-described caliphate.

The U.S.-backed Syria Democratic Forces, which include Kurdish, Arab and Turkmen fighters, have driven IS from large swaths of territory, but Turkey views the Syrian Kurds who dominate the group as an extension of the Kurdish insurgency raging in its southeast.

Turkey has sent its own forces across the border to back Syrian opposition fighters, and has suggested they lead the offensive to retake Raqqa. The Turkey-backed forces, now pushing toward the IS stronghold of al-Bab, have clashed with IS as well as the SDF.

The Britain-based Syrian Observatory for Human Rights said Turkey-backed opposition fighters captured six villages near al-Bab on Tuesday and are now about 4 miles (7 kilometers) from the town.

Turkish Foreign Minister Mevlut Cavusoglu told reporters that the U.S. Chairman of the Joint Chiefs of Staff, Gen. Joseph Dunford, told Turkish officials during a recent visit that Kurdish-led forces would only have a role in encircling Raqqa and would not enter the city.

"We hope that this will be the case and we expect that our partners keep their promises," Cavusoglu said. He said "local" fighters aided by Turkish special forces should drive IS out of Raqqa, and suggested that residents of the mainly Sunni Arab city might not welcome Kurdish forces.

"We should not force the people to choose between two evils," he said.

The SDF has made some gains since the Raqqa offensive began Sunday, taking over nearly a dozen villages.

Ilham Ahmed, a senior official in the political arm of the SDF, said the same forces leading the offensive will enter Raqqa.

"The campaign will continue to be in that form until it enters the city," Ahmed told The Associated Press. She said the Kurdish-led SDF, as the main force on the ground, is best placed to decide what forces are needed to liberate the city.

A U.S. defense official said that the agreement Dunford made with his Turkish counterpart was not explicitly a U.S. prohibition on Syrian Kurdish fighters going into Raqqa. The official said it was rather a U.S. commitment to "work with" Turkey on the ultimate composition of what is expected to be a predominantly Sunni Arab force to seize and hold the city. The official was not authorized to discuss details of Dunford's talks in Ankara and spoke on condition of anonymity.

Ahmed said U.S officials have not yet raised the possibility of Turkish or Turkey-backed forces taking part in the Raqqa offensive.

"I think (Ankara) is trying to pressure the Americans to bring in allied groups into Raqqa. We are the main party that decides if we need such troops to be involved," she said. "We are self-sufficient. There is no need."

A Raqqa-based Syrian activist group, known as Raqqa is Being Slaughtered Silently, said IS militants have prevented residents of a nearby village that was bombed by coalition forces from leaving and imposed a curfew there.

Both the Raqqa activist group and Observatory said that IS militants have blown up a number of bridges over irrigation canals north of Raqqa, near Ein Issa, where the SDF is based.

Elsewhere in Syria, two airstrikes killed at least 21 civilians in the northwestern rebel-held province of Idlib, according to the Observatory and the Syrian Civil Defense, volunteer first responders also known as the White Helmets.

The Observatory and the Civil Defense blamed the strikes on government and Russian jets. Russia is a key military ally of Syrian President Bashar Assad.

Government troops meanwhile drove opposition fighters out of an important district south of Aleppo city, the Syrian military said. The rebels launched a campaign against government-held western Aleppo on Oct. 28, with the aim of lifting the siege on the rebel-held eastern part of the city.

Later Tuesday, Russian media reported that the Russian navy is preparing to strike militants on the outskirts of Aleppo.

The Interfax news agency and online Gaztea.ru cited unnamed Defense Ministry officials as saying that jets based on the Admiral Kuznetsov aircraft carrier are preparing to conduct the raids within hours. They said that other Russian navy ships will also launch precision weapons at militant targets near the city.

Moscow says that Russian and Syrian warplanes have observed a moratorium on airstrikes on the rebel-held eastern part of Aleppo for three weeks, but the break hasn't applied to the surrounding province.