Sanctions against Russia will remain unchanged 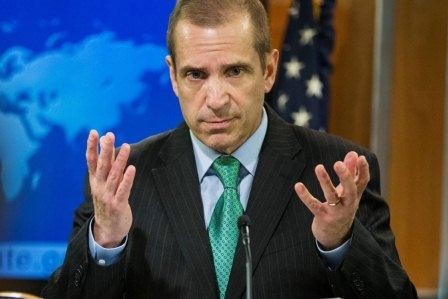 The State Department said Wednesday the U.S. stance regarding sanctions against Russia will not change following the election of Donald Trump to the presidency.

"Our stance was they have been and will certainly remain throughout this administration," agency spokesman Mark Toner said during a press briefing.

"With regard to sanctions on Crimea, those remain in place until Russia removes its forces from Crimea and gives this peninsula back to Ukraine."

The U.S. has sanctioned Russia since it annexed Crimea in 2014.

During his campaign, Trump questioned the reason for NATO, openly said he admired Russian President Vladimir Putin and allegedly accepted the annexation of Crimea. After his victory was ensured, Putin said Moscow was ready to restore relations with U.S.

When asked about the latest report by the International Atomic Energy Agency (IAEA) that said that Iran was storing more heavy water than the nuclear deal allowed, Toner said Tehran "made no effort to hide this" but did not confirm whether it was a violation of the Joint Comprehensive Plan of Action (JCPOA) nuclear deal Tehran signed with word powers that placed restrictions on the Iran's nuclear program in exchange for the lifting of some sanctions.

When asked whether U.S. relations with Japan would be affected by the election outcome, Toner said Tokyo, regardless of the administration, was "core foreign policy interest to the U.S."

A security treaty between the two countries stipulates that the U.S. is committed to defending Japan, if necessary.

During his campaign, Trump said has questioned the logic of having American troops in foreign land and said counties should assume the costs of protecting themselves.

Also, the U.S. protests China's militarization in the South China Sea and has conducted freedom of navigation operations in the area. Japan fears the commitment of Washington might change in a Trump's administration.

Regarding the transition to a new administration, Toner said State Department officials would make every effort to make sure Trump's team fully understands the current administration's perspective on all U.S. diplomatic policies, including Syria.

He also said Secretary of State John Kerry, along with President Barack Obama were committed to achieving a "well-coordinated" and "effective" transition to Trump's administration.

Trump will take the oath of office Jan. 20 as the 45th President of the United States.