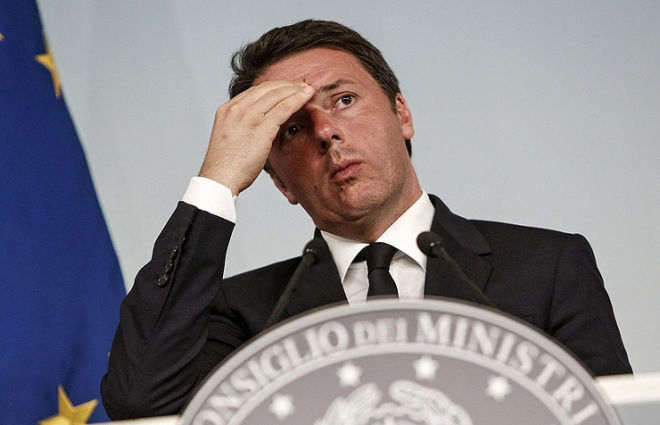 "My experience of government finishes here," he said, adding that the opponents of the reform had won an ‘extraordinarily clear’ victory.

He said it shortly after midnight Central European Time at a news conference in the Palazzo Chigi, the official residence of the Prime Minister of the Italian Republic, following the defeat of his proposal for a constitutional reform in Sunday’s national referendum.
"My experience of government finishes here," he said, adding that the opponents of the reform had won an ‘extraordinarily clear’ victory.

Renzi admitted his defeat and took on responsibility for it, saying the voters’ turnout at the polling stations had been unexpectedly high. He called the vote in the referendum a feast of democracy and congratulated on the occasion of victory the forces that did not support the reform, wishing them further fruitful work.

The data from exit polls suggested about 60% voters had spoken against the constitutional reform proposed by Renzi and not more than 40% had supported it.

Leaders of the political opposition including former Prime Minister Silvio Berlusconi, the leader of Movimento 5 Stelle (the Five Star Movement), Luigi di Maio, and the leader of Lega Nord (the Northern League), Matteo Salvini raised objections to Renzi’s initiatives on transformations in the Senate, the upper house of parliament, from the very start of the campaign.

Luigi di Maio described the outcome of the referendum as a flop for the ‘arrogance of power’. "The era of shortcuts and Tweets that put a prime minister in power is finished," the international news media quoted him.

Marine Le Pen was quick to react to the data from ‘Renzirendum’ exit polls. "The Italians have disavowed the EU and Renzi," she tweeted. "We must listen to this thirst for freedom of nations and protection."

In the meantime, The Daily Telegraph said at its homepage the euro had dropped 1% versus the US dollars on the reports that the adversaries of the Renzi-proposed reform had raised the upper hand in the referendum. It said, however, that the slide was not as big as that of the Pound Sterling versus the dollar in the wake of Brexit.