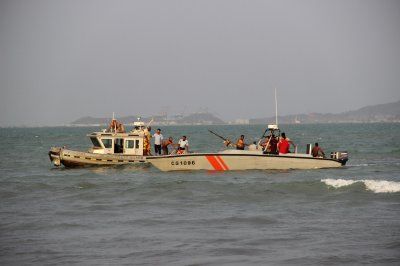 At least 35 of the almost 60 people who were on board a ship that sank in the Arabian Sea off the coast of Yemen have been rescued, officials say.

The cargo vessel disappeared about 48km (26 nautical miles) north-west of the remote island of Socotra while sailing from the eastern province of Hadramawt.

The government says the incident took place five days ago, but it appears that it was only confirmed on Tuesday.

The cause of the disaster is not clear, but a minister said it was an accident.

The government has asked merchant vessels and warships in the area to help search for survivors, some of whom are believed to have escaped in lifeboats.

Fisheries Minister Fahd Kavieen wrote on his Facebook page on Wednesday afternoon that so far 35 people had been rescued.

He was hopeful that more could be found, but warned that the next few hours would be "very critical" and appealed for helicopter support from the Saudi-led coalition backing his government in its war against the Houthi rebel movement.

Earlier, Mr Kavieen was quoted by the AFP news agency as telling reporters that the ship was believed to have sunk on Friday as a result of an "accident", citing "preliminary information". The government had sent out an SOS after the sinking was confirmed on Tuesday, he added.

But the Aden al-Ghad news website quoted a source in the coastguard as saying he had received a notice from authorities in Hadramawt on Tuesday night that contact with the ship had been lost several hours after it set sail from Mukalla.

Flights between the Yemeni mainland and the island were suspended in March 2015, when the conflict between the government and the Houthis escalated and the Saudi-led coalition closed the country's airspace and began carrying out air strikes.

There are no regular ferries, forcing islanders to seek passage on cargo vessels.