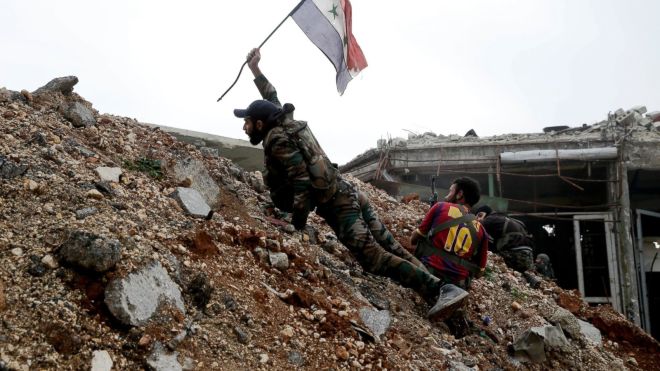 Syrian government troops and allied militias on Monday seized a wide strip along the southern edge of the city of Aleppo from rebels, tightening the noose on remaining opposition fighters and tens of thousands of civilians still in the shrinking enclave, state media and opposition activists said.

State TV aired footage from Sheik Saeed, one of eastern Aleppo's largest neighborhoods bordering some of the most crowded districts. A residential area, Sheik Saeed also has open agricultural fields that often gave an advantage to rebels fighting off past government advances.

Sheik Saeed's fall, after days of intense clashes, squeezes the rebels — along with tens of thousands of civilians — into a handful of neighborhoods in central Aleppo. The Britain-based Observatory for Human Rights estimates the rebels and the remaining civilians are now enclose in a small area that's only 10 percent of the city's territory that rebels used to control.

The Observatory said government forces continued their bombing of the remaining rebel areas on Monday, including airstrikes on Bustan al-Qasr, near the government-controlled western part of Aleppo, and al-Fardous, one of the most crowded neighborhoods in the remaining rebel-held enclave.

State TV has lately been broadcasting every day images of hundreds of civilians fleeing areas where troops are advancing, pouring into western Aleppo. Those areas are only accessible through government-monitored crossing points.

The swift Russia-backed Syrian ground offensive to retake rebel-held eastern Aleppo, which began on Nov. 26, followed an intensive aerial bombing campaign that knocked out most of the eastern sector's medical facilities, targeted civil defense and municipal vehicles and blocked roads with rubble. The eastern Aleppo area has also been cut off from outside aid since July by a government siege.