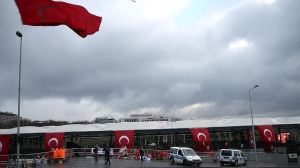 Police identified Friday one of the perpetrators of the terror attack in Istanbul which martyred 44 people and injured dozens of others, Axar.az reports quoting Anadolu Agency.

On Dec. 10 at around 10.30 p.m. (1930GMT), a car bomb went off outside a football stadium in Istanbul's Besiktas district, two hours after the end of a Turkish League football match.

The blasts martyred 44 people, mostly police officers, and 56 others are still under treatment at the hospitals, according to Istanbul Governor's office.

A total of 13 suspects linked to the bombings have been arrested so far. Over 20 suspects were also arrested for social media posts over Saturday night's terror attack in Istanbul, anti-terror police said.