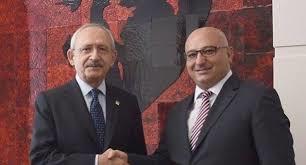 Axar.az reports citing to DailySabah, the anti-terror and anti-organized crime department of the Istanbul Chief Prosecutor's Office had previously ordered the detention of Gursul after he was found to be a user of ByLock, an encrypted communication application that was used by FETO members for internal communication.

Gürsul, impeached of being a FETO member, was detained on December 6 in Ankara and was brought to Istanbul Security Directorate, while security officers also carried out a search in his house within the framework of the probe.

Testimony from Gulenists in the bureaucracy detained after the July 15 coup attempt pointed to the prevalence of the app use.

Various ministries have since launched an investigation into workers who allegedly used ByLock by actively suspending and terminating app users who were found to be active members of FETO.

The ByLock codes were broken in August by the Turkish National Intelligence Agency (MIT), resulting in 60,000 members being uncovered. Another encrypted messaging app, Eagle, was also recently deciphered by intelligence officers.

Harsh criticisms were leveled at the CHP as a result of the discovery. Party members also expressed sadness after the FETO infiltration of their party was revealed.