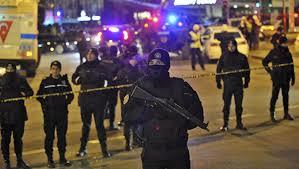 According to Hajiyev, the woman was reportedly in a satisfactory condition and discharged from hospital after receiving necessary medical care.

An armed attack killed at least 39 people and injured 69 -- four of them critically –at a nightclub in Istanbul early Sunday.

"16 of the victims are foreigners while the other five are Turkish citizens," the minister said, adding that efforts continue to identify the other 18 bodies.

Soylu said police forces were hunting down the terrorist.

The interior minister also mentioned that 69 people are also in hospitals, receiving treatment. "4 of those injured are in a critical condition. One of them is severely injured," Soylu said.

Earlier, Governor Vasip Sahin described the attack in Ortakoy, Besiktas, as “cruel” and an “act of terror”.