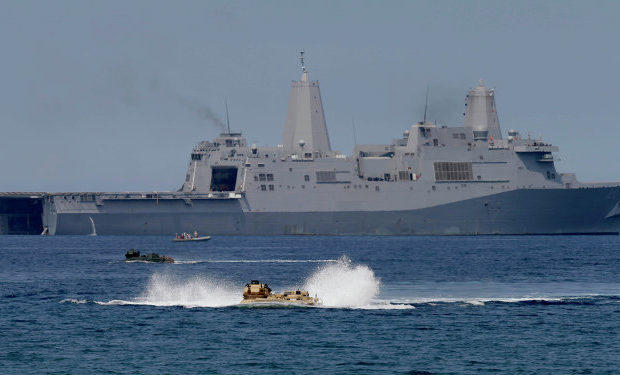 China's sole aircraft carrier conducted drills in the South China Sea, the navy said, days after neighboring Taiwan said the carrier and accompanying ships had passed 90 nautical miles south of the island amid renewed tension between the two sides.

The Soviet-built Liaoning aircraft carrier and accompanying warships sailed round the east coast of Taiwan in what China called a routine exercise complying with international law.

The carrier group also ran helicopter exercises, it said, but did not give details on the exact location.

China claims most of the South China Sea through which about $5 trillion in ship-borne trade passes every year. Neighbors Brunei, Malaysia, the Philippines, Taiwan and Vietnam also have claims.

The drills also come at a time of heightened strain with self-ruled Taiwan, which Beijing claims as its own, following U.S. President-elect Donald Trump's telephone call with the island's president that upset Beijing.

Last month China conducted its first ever live-fire drills using an aircraft carrier close to Korea and announced on Dec. 25 that the Liaoning and its accompanying fleet would carry out what it called routine exercises in the Western Pacific.

Taiwan's Defence Ministry said on Dec. 26 that the Liaoning and five accompanying ships had entered the top half of the South China Sea after passing south of Taiwan, and later docked at a base on China's Hainan island.

The flotilla raised alarm in Japan when it steamed between the Japanese islands of Miyako and Okinawa.

Japan said one of its Maritime Self Defense Force ships and a P3C patrol aircraft had spotted six Chinese naval vessels including the Liaoning traveling through the passage, and they also scrambled jets after a helicopter that took off from a Chinese frigate flew near Miyako Island.