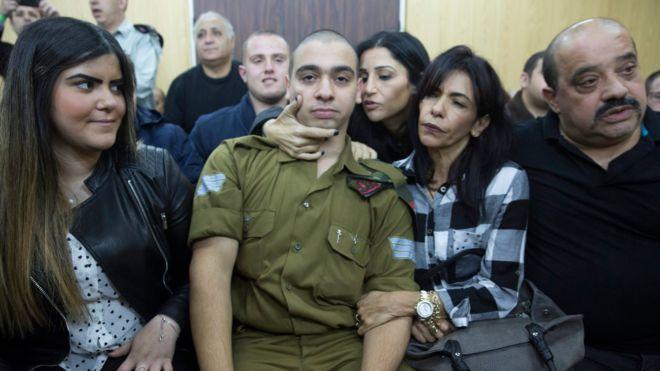 An Israeli soldier filmed shooting dead a wounded Palestinian attacker after he had been disarmed of a knife has been convicted of manslaughter.

Axar.az reports that, Sgt Elor Azaria, 20, shot Abdul Fatah al-Sharif, 21, in the head while he was lying immobile on a road.

The incident happened in Hebron in the occupied West Bank last March, after another soldier was stabbed.

Sgt Azaria said he thought Sharif might have an explosive vest, but prosecutors said his motive was revenge. The high-profile trial has proven extremely divisive in Israel.

There have been rallies to support the soldier and some senior politicians backed Sgt Azaria. However, top military figures were quick to say that his actions did not reflect the values of the Israel Defence Forces (IDF).

In the incident on 24 March, Sharif and another 21-year-old Palestinian, Ramzi Aziz al-Qasrawi, stabbed and wounded an Israeli soldier before troops opened fire on them, wounding Sharif and killing Qasrawi.