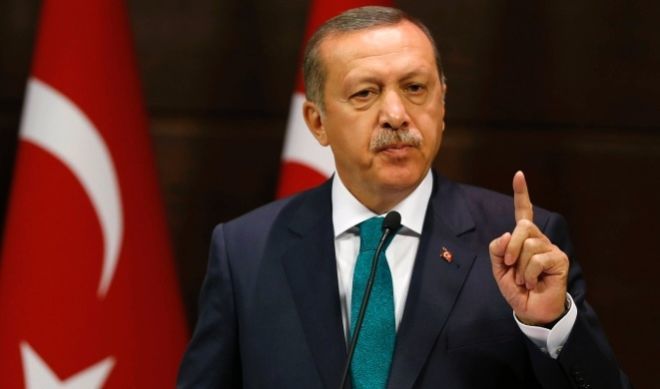 Turkey is aware terrorist organizations are just tools and the main struggle is with the forces behind them, President Recep Tayyip Erdogan has said.

Axar.az reports that, addressing local administrators known as mukhtars at the presidential complex in Ankara on Thursday, Erdogan said: "If we don't break these tools, we will not be able to win the struggle against the forces behind them.

"Those who fight under the roof of Daesh are now fighting under the PYD/YPG identity," Erdogan said, adding: "When it comes to FETO [Fetullah Terrorist Organization], it has become an unprincipled, dirty organization which serves all its opportunities for the benefit of our [Turkey's] enemies."

Recalling the killing of Russian Ambassador to Turkey Andrey Karlov in Ankara, the president said: "Those who doubted the role of FETO in the July 15 coup attempt must have been convinced" after the assassination.

"We hope that everybody will place their cards on the table at this point. No one can say 'the PKK has no ties with the PYD'.

"No one can say that 'Our priority and goal is to fight against Daesh'. The attitude displayed during Turkey's al-Bab operation shows there is no such sensitivity."

affecting the Turkish lira, he said: “The attacks that Turkey went through have an economic dimension.”

“There is no distinction between a terrorist carrying guns and bombs, and the one who has dollars, euros and interests in terms of purpose. The target is to bring Turkey to its knees and divert its focus from its targets. For that reason they use the exchange rate as a means [of war].”