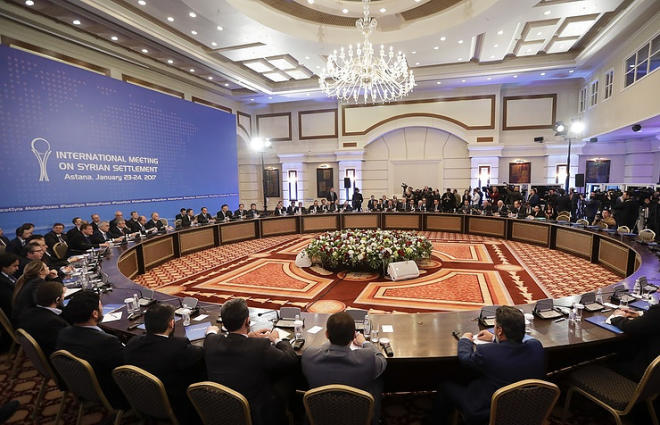 The first day of Syrian peace talks in Astana was successful, head of the Russian delegation in Astana Alexander Lavrentiev said Monday, adding that the presence of the UN special envoy for Syria, the US ambassador to Kazakhstan and representatives of Syrian government and opposition groups was especially important for the meeting's outcome.

Axar.az reports that, the final document of the Astana talks on Syria is under discussion and it will be presented to talks participants on Tuesday after a final agreement is reached, Lavrentiev said Monday.

"We keep up the work. The negotiation of the final text of the statement is underway, it will be presented to the participants for their consideration and will be finally agreed upon in the course of tomorrow's session," Lavrentiev told reporters.

Delegations of Russia, Iran and Turkey hold talks on Syrian peace at a hotel in Astana, Kazakhstan, Monday, Jan. 23, 2017.

The talks between the representatives of the Syrian government and opposition groups in Astana will resume early on Tuesday with the participation of Russia, Iran and Turkey, which are countries-guarantors of the Syrian truce, opposition delegation member Yahya Aridi said earlier.
The intra-Syrian talks in Kazakhstan's capital brokered by Moscow, Ankara and Tehran, are expected to last through Tuesday. The talks on crisis settlement bring together the delegation of the Syrian government and representatives of armed opposition groups for the first time since the beginning of the state's civil war.