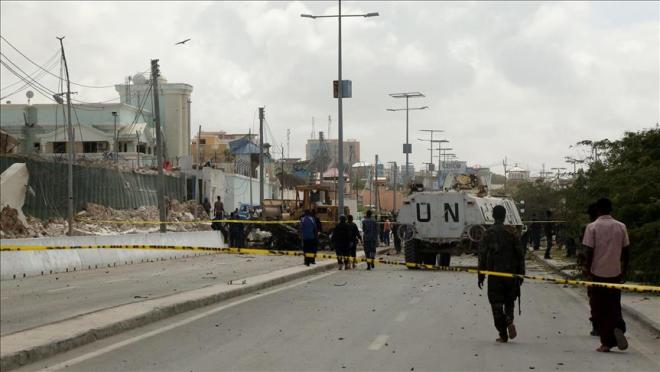 At least 20 people, including 10 Kenyan peacekeepers, were killed on Friday when al-Shabaab militants attacked their base, officials have said.

The attack took place on the African Union Mission in Somalia (AMISOM) base in Kulbiyow town in Somalia’s Lower Juba region.

Abdi Ahmed Hassan Somali, a senior military officer in Lower Juba, confirmed to Anadolu Agency that al-Shabaab attacked the Kenyans’ base in Kulbiyow, which is 18 kilometers (11 miles) from the Kenya-Somalia border.

He said it was early morning when the militants detonated a car bomb at the gates of the facility.

AMISOM spokesman Joe Kibet told Anadolu Agency there had been fighting after the explosion but could not confirm the death toll.

However, Yusuf Ali, a resident in nearby Jilib town, told Anadolu Agency that al-Shabaab displayed the remains of dead soldiers after the Kulbiyow attack. The claim could not be independently verified.

Al-Shabaab itself claimed to have killed 57 Kenyan troops but Kenya’s defense ministry rejected the claim.

In a statement the ministry said the attack had been “repulsed” and scores of al-Shabaab militants killed.

It is not the first time the Somali-based al-Qaeda affiliate has attacked Kenyan military camps in Somalia.

On 15 Jan. 2016, al-Shabaab attacked a Kenya Defence Forces’ base in El-ade, in the Gedo region, and claimed to have killed over 100 soldiers.