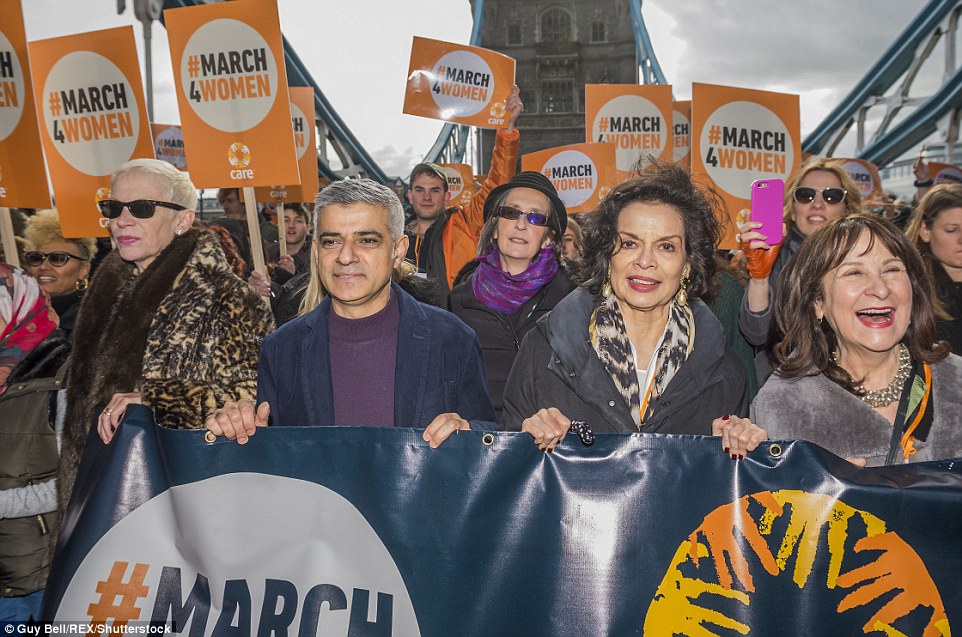 A host of celebrities led the way as thousands marched through the capital today in a bid to highlight the plight of refugees and condemn President Donald Trump.

As Mayor of London Sadiq Khan told the crowd, 'This is what a feminist looks like', Annie Lennox suggested US President Donald Trump had been 'helpful' in drumming up support for women's rights.

The stars proudly chanted, held aloft banners and placards and stood in solidarity with activists campaigning for women's rights across the world as they made their way through the city.

Eurythmics star Annie Lennox, 62, said Trump's 'locker room talk' acted as a 'catalyst' for many women, as she took part in the event in London.

Thousands of people took part in the march from City Hall across Tower Bridge, with the famous London landmark closed to traffic for the event.

Placards and banners were emblazoned with messages such as '#march4women', 'p***y power' and 'I'm a woman phenomenally, phenomenal woman that's me'.

The Mayor of London Sadiq Khan told crowds: 'This is what a feminist looks like.'

Comments made by Mr Trump in a 2005 leaked video in which he bragged about grabbing women 'by the p***y' made global headlines during the US presidential campaign.

Lennox said: 'In a weird kind of way that kind of event that happened actually catalysed the issue for a lot of girls and women in a particular way that became very strong.

'It actually became very real for them, because when someone says 'It's just locker room talk', actually don't we think it's time that we should address that particularly if they're the leading representative of one of the biggest most influential countries in the world?

'So that made women very angry, that made the issue very clear for them.'

Bianca Jagger - the former wife of Rolling Stones star Mick Jagger and now a human rights campaigner - said she was calling for people 'to think about what we are facing with a President in the US who wants to belittle women, who wants to reduce all rights'.